Where is this Fereshteh Street ?

Before talking about the most famous restaurants in Fereshteh Area, which is also known as Hestooran Restaurant, let’s talk about some details. Fereshteh Area is one of the most expensive regions in Tehran. This region has a suitable climate and is located in the range of Alborz Mountains. Thus, it has a relatively pleasurable climate compared to the other regions of Tehran.

What Does “Fereshteh” Mean ?

Fereshteh Street is an old area in Tehran. Its formal name is Shahid Bahonar Street. But why is this area known by this name?

In the past, there were regions in this area where people came to collect straws. So, this area was gradually named “Hestooran” which means “people who collect staws”. Over time, the name was changed into Fereshteh. 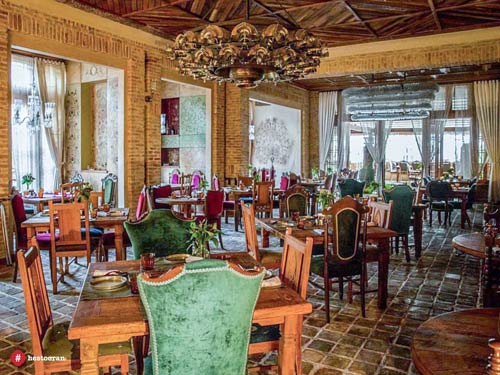 There was a canebrake next to the village where people went to collect straws. The Country Garden of Fathali Shah of Qajar was built in this canebrake, which was called Fereshteh then after. Mohammad Shah of Qajar also built a small and simple building in this garden, followed by Sahebqaraniyeh Palace being constructed by Naser-e-din Shah of Qajar. The last building constructed by the Qajar kings in Fereshteh Garden was Ahmadshah Palace. Although shortly afterwards, many buildings have been constructed in the past 90 years, the above-mentioned are among historical and tourist attractions in Fereshteh Area. Many people come to visit the ancient buildings, which are part of Iranian history and culture. 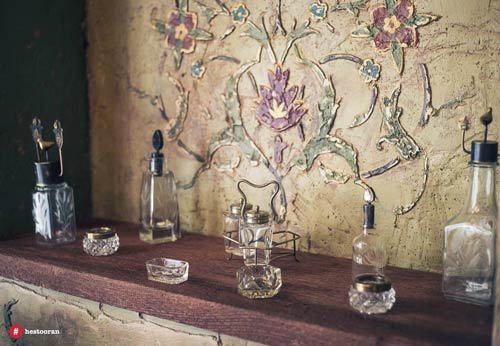 Fereshteh Restaurant, a Manifestation of a Noble Iranian Restaurant Many people who visit Hestooran Restaurant in Fereshteh Area for the first time will be surprised of the food serving manner in this restaurant. Almost every dish is made of copper. Copper dishes have a special position in Iranian culture. These dishes were common among the Iranian people in the past.

They used them to cook and serve foods. With the technology being developed, the cooper dishes were replaced by porcelain, polymer, etc. Many dishes used today as replacements of copper dishes are harmful for the healthy. Relying on the noble Iranian culture, Fereshteh Restaurant employs copper dishes with traditional designs to serve foods. The space of Fereshteh Restaurant was inspired from the spaces of the rich houses of the old Tehran, rural houses, Shemiran houses along with some non-Islamic details. This Restaurant would be a great experience of Noble Iranian Foods in an Environment Derived from Traditional Iranian Culture.

For this noble Iranian restaurant, fantastic thrones,  Polish chairs, leather-covered chairs, plates and guns on the wall have all be selected by an artistic taste. The tables and chairs of the restaurant are all made of walnut wood. Walnut wood has been used to build wooden objects for a long time. But today, due to its high price, it is replaced by MDF and Letron in many cases. Do you prefer Persian food ... 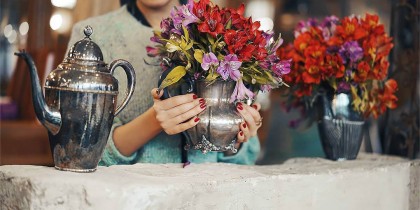